Dr. Voddie Baucham posted on the Robert George article the same day that I did. However, he also included two videos that are well worth the time to look at. I encourage you to read his blog entry here and watch both videos. Just another reminder that Obama and the pro-death folks like him are truly evil.
Posted by Scott at 6:20 PM No comments:

I sort of hate it when I find one of those youtube video things, because then I just waste time watching them. But in the process of posting the last little clip featuring parts of a message from Paul Washer, I found another clip that I wanted to share.
In fact, I was actually at the conference where this audio was recorded. It was a couple years ago at a SBC Founders Conference in St. Louis (actually, St. Peter's, MO). I was so moved by the message at the time that I purchased a DVD copy and have shown it to several folks.
Anyway, here is the clip. But be warned. It is highly challenging.

One of my favorite preachers is a man named Paul Washer of HeartCry Missionary Society. I heard him several years ago at Rockport Baptist in St. Louis and have watched in recent years as God has caused his ministry and influence to both grow among some, and be reviled among others.

The reason for both is that he unashamedly proclaims the truth of the Gospel. I don't even know who put this piece together, but this is a portion of his preaching set to music and with some great visuals. I'm not sure if Paul Washer approves of this or not, knowing his emphasis on bare bones gospel preaching, but I found it inspiring.

The heart of the message is on truly knowing if we are saved. Enjoy (or be challenged, or both).
Posted by Scott at 4:24 PM No comments:

My first, and I still think best, choice for President, Mike Huckabee recently sent out a request to identify pro-life voters. His message said in part:

I support and have always supported passage of a constitutional amendment to protect the right to life. My convictions regarding the sanctity of life have always been clear and consistent, without equivocation or wavering. I believe that Roe v. Wade should be over-turned. I know there are millions of Americans who believe as I do. All are concerned about the negative impact an Obama presidency and a Democrat controlled Congress will have on the Courts and the fight to overturn Roe v. Wade if they should win this Election Day. We cannot let that happen.

Gov. Huckabee is asking folks to sign a Pro-Life Petition which reads as follows:

I have no doubt that the Democrats' ideas are totally wrong for America and many of their plans would take us the opposite direction from where America needs to go.

Led by Senator Obama, the Majority of the Democrat Party in the House and Senate support the most liberal and indefensible positions on abortion, including a refusal to support a ban on the most vile form of all, partial birth abortion. Led by Senator Obama these Democrats are actively pushing for what the anti-life forces euphemistically call "reproductive rights."

Against them, we must rally every American that seeks to protect and cherish life. I urge you to sign the Petition below and ask your friends and family to do the same.

I would encourage anyone and everyone to stop by and sign this petition. I know that there are those who warn against becoming a "single issue" voter, but the truth is there is not a single issue that is more important than the lives of millions of children who have been slaughtered in the last few decades of our nation's history. (BTW, for a pretty good take on the "single issue" issue, go here or go here).

On The Lighter Side?

Chalk it up to my immaturity, lack of brain cells, or whatever, but I've always been a fan of the church cartoon. I know they can be pretty shallow at times, but I find much to laugh at in my life and in the life of the church, so there you go.

Anyway, one of my favorites is Mike Waters over at Joyful 'toon. I even signed up to have the latest emailed to me on a regular basis. And while this may seem like a venture into the "lighter side" of things, I found an amazing amount of insight in this most recent 'toon, especially regarding my recent posts regarding discernment over Obama's pro-death stands, lack of focus on the Word, etc. Here it is: 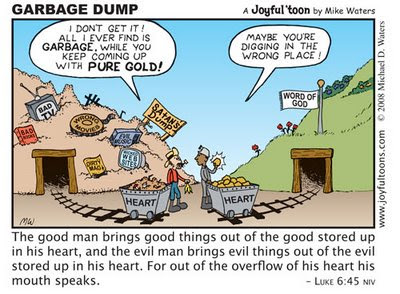 It seems to me that the reason there is so much garbage out there; the reason so many can be taken in by a political candidate's perceived charms; the reason we are willing to sell out the lives of countless children for the sake of the economy; all of this is simply due to the age old "garbage in, garbage out" process.

If we truly want to see our nation changed, then God's people MUST get back to preaching the Word, popular or not. It's the only way to find true gold.
Posted by Scott at 9:50 AM 1 comment:

So says Robert George of Princeton in a recent blog article. To many, that is not surprising. And to most who read this particular blog, you don't need to be convinced of the horror that awaits our nation if this man becomes our President. But George's article is too alarming to pass up. His summary says:

What kind of America do we want our beloved nation to be? Barack Obama's America is one in which being human just isn't enough to warrant care and protection. It is an America where the unborn may legitimately be killed without legal restriction, even by the grisly practice of partial-birth abortion. It is an America where a baby who survives abortion is not even entitled to comfort care as she dies on a stainless steel table or in a soiled linen bin. It is a nation in which some members of the human family are regarded as inferior and others superior in fundamental dignity and rights. In Obama's America, public policy would make a mockery of the great constitutional principle of the equal protection of the law. In perhaps the most telling comment made by any candidate in either party in this election year, Senator Obama, when asked by Rick Warren when a baby gets human rights, replied: ''that question is above my pay grade.'' It was a profoundly disingenuous answer: For even at a state senator's pay grade, Obama presumed to answer that question with blind certainty. His unspoken answer then, as now, is chilling: human beings have no rights until infancy - and if they are unwanted survivors of attempted abortions, not even then.

The rest of George's article spells out the particular votes and legislation Obama is identified with that back up these statements. I urge you to read the whole article here. Again, I'm assuming from past comments that the majority of folks who find this blog, either by accident or on purpose, are no friends to the Obama campaign. But I pray folks will see this information, along with dozens of other alarming stands this man has made, and realize the dark path he wants our nation to take.

I'm still not an all out McCain fan. But I do know this. If Obama is elected it will be on the scale of the judgment God sent on His people through kings like Manasseh who was guilty of sacrificing his own son to a pagan idol (2 Kings 21). God often gave His people the king they deserved, and maybe that's what will happen. But I pray with all my heart that people will see through this man and run the other way as fast as possible!
Posted by Scott at 11:15 AM No comments:

For several years now we have been fighting in Missouri to keep a $500 loss limit on casino gambling. It’s not that restrictive to begin with. That current loss “limit” simply says that a gambler on one of our “boats” (let’s not get into the whole issue of “boats” that are permanent land based buildings!) can only lose $500 every TWO HOURS! That’s right, every two hours. That’s $500 per every two hours. $6,000 per day. $42,000 per week. $168,000 per month. Not really much of a limit to begin with is it.

In fact, this limit was originally an idea proposed by the casinos themselves as a safeguard

against problem gambling. Even they recognized the benefit of trying to put at least some kind of limit on things. Not to mention how this serves as a deterrent for money laundering schemes in casinos, etc.

Anyway, the battle rages on. This year it’s called Proposition A. It’s not bad enough that the gambling interests now want to remove these limits so they can rake in the big bucks at the expense of problem gamblers and their families. Now they want us to think it’s a noble cause for our children.

The slick PR types are promoting this as “millions of dollars for our schools.” There are a couple of problems with that. Number one, the end result of this legislation will not actually add any monies to Missouri schools since the budget will just be altered to offset whatever revenue this might bring in (a standard “shell game” in Jefferson City). Number two, I think we’ve pretty much proven over the years that simply throwing more money at our schools doesn’t help that much anyway.

The real outcome of this legislation will simply be that people already struggling with gambling addiction will be allowed to lose their homes and families quicker, the casino owners will make a fortune, and the state will be given the burden of providing aid for those families devastated by the whole thing. And yes, the schools will get some money. But just like with the lottery promises, etc. the Jeff City shell game will just move things around so that the net increase for schools will be next to nothing.

For more information (and a more intelligent discussion of the issue than found here), check out these links.

Vote No on A
Casino Watch

I wish we didn’t have casinos at all. But I hope Missouri voters can at least see through this fancy trickery to see that no one will benefit in the end with Prop A except the casino folks.