(This is basically a "reprint" of a post I did 8 years ago.
Sadly, the situation hasn't improved, but the truth of this hasn't changed either)
On March 22, 1857, the Prince of Preachers, Charles Haddon Spurgeon, climbed into his pulpit in London to deliver a message on 2 Peter1:10-11.  The theological issue he was dealing with was election, as in a Sovereign God choosing for Himself a people to serve Him and glorifying His name.


However, in considering Divine Election, Pastor Spurgeon was moved to make a few comments about the man made election of government officials.  As we think of going to the polls next Tuesday, I pray his words would speak to us. 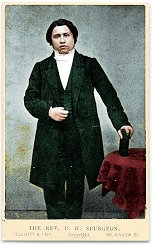 I would not, however, say to any persons here present, despise the privilege which you have as citizens. Far be it from me to do it. When we become Christians we do not leave off being Englishmen; when we become professors of religion we do not cease to have the rights and privileges which citizenship has bestowed on us. Let us whenever we shall have the opportunity of using the right of voting, use it as in the sight of Almighty God, knowing that for everything we shall be brought into account, and for that amongst the rest, seeing that we are entrusted with it.

And let us remember that we are our own governors, to a great degree, and that if at the next election we should choose wrong governors we shall have nobody to blame but ourselves, however wrongly they may afterwards act, unless we exercise all prudence and prayer to Almighty God to direct our hearts to a right choice in this matter. May God so help us, and may the result be for his glory, however unexpected that result may be to any of us!

1.  It is our responsibility to vote.  Just because we are Christians, citizens of the Kingdom of God, does not negate our citizenship in this nation.  And we are called to be good citizens.  So get involved and vote.

That being said, I hope you vote.  I know the choices don't seem all that great, but I hope you vote as in the sight of God, not just voting against one person, but truly voting for someone you can stand before God and be confident about in your vote.

Indeed, as Spurgeon prays, may God so help us to direct our hearts to a right choice in this matter, and may the result be for his glory, however unexpected that result may be to any of us!
Posted by Scott at 7:00 AM No comments:

The most important question we face in this life is not "who do I vote for next Tuesday?"  It's not "should I wear a mask?" The question all of us need to deal with is "Who is Jesus?"  Who He is and what He came to accomplish is the most significant truth in this world and the world to come.

Because the greatest enemy we face is not an invading army. Our greatest problem is not the upcoming elections and the political bickering in our nation.  Our greatest threat isn’t Covid-19 or any other disease.

Our greatest enemy is death.  Our greatest problem is sin that leads to death.   Our greatest threat is the wrath of God righteously and rightfully poured out on our sin.  And this is the enemy Jesus came to defeat, the problem He came to solve, the threat He came to overcome.

November 12, 1983.  On a cold St. Louis evening, only two months after Cheryl and I started dating, we stood in line in the snow to see the Christian rock band, Petra.  As a new Christian used to listening to Kiss, Van Halen, etc. I was a little skeptical about this Christian rock thing.  But I was far from disappointed.  In fact, I became a lifelong Petra fan.

Over the years, we saw Petra several more times, through several different lineups.  Always with the same reaction.  What a great band.  Great musical talent.  Superb songwriting from the band’s founder/guitarist/heart, Bob Hartman.  Fantastic show.  And a genuine desire to praise God and tell people about Christ.  Years (and years) later we would even take our oldest kids to the “Farewell Tour.”  Petra has always been a family favorite.  The soundtrack to our lives.

That first concert also started a love of Christian music that would result in my spending several years in college and seminary working at Christian radio stations.  Getting to be the guy on stage at some of those shows, introducing bands, was a real highlight.

Over the years, I watched a lot of bands come and go.  Some were really popular for awhile, but faded away.  Some I really liked, but never hit the “big time.”  Personal taste has a lot to do with it.  Talent surely does as well, but so does “luck” and timing.  But after over 30 years as a band, Petra was still going, still recording, still touring.  Still popular.

Fast forward to last Sunday.  Years after the Farewell, that last lineup of the band was getting together for a one day “Petra Reunion.” Our youngest son, Kenaniah (whose name is a biblical character, David’s song leader, but also happens to be the subject of a Petra song; I’ll let you decide which one he’s named after), was too young to see the Farewell Tour.  But he’s listened to this band his whole life.  So we jumped at the chance to go see this show.  It was only just over 100 miles away.  And once again…not disappointed. Old Guys Rule. 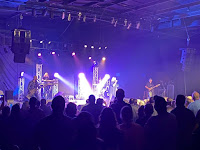 It wasn’t a massive crowd.  Covid, ya know.  It was mostly an older crowd.  But what an enthusiastic bunch!  And how proud I was to look over and see my 16-year-old with a huge smile, singing along with songs written decades before he was born.  Reminded me a bit of the excitement of another 16-year-old back in ’83.

So what’s the point, other than a sentimental musical memory tour?  Just this.  Singer John Schlitt and guitarist Bob Hartman are both 70-ish.  And both put on an amazing display of their God given talent, and were sure to give God all the glory.  Old Guys Rule.  That’s actually the name of a song by another John Schlitt project, along with Billy Smiley of Whiteheart (another old Christian band).  The Union of Sinners and Saints recorded that song a couple years back, and it not only says something about these old musicians, but about their music.

Again, I’ve seen a lot of bands come and go.  Some have lasted.  A lot haven’t.  Not many will be doing 30+ year farewell tours and reunions.  It says something about the quality of their music, and their message.  I’m not just an old geezer talking about “the music when I was a kid.”  I actually like a lot of newer bands.  I really enjoy some new bands that are so new a lot of folks haven’t even heard of them yet (Collision of Innocence, Bayless, and Relent all come to mind).

Here’s where we get to the hymns stuff.  (Sorry it took so long).  I’m an odd creature, in many ways, but the relevant way here is my musical taste.  I’m one of the few guys I know who is a conservative, antique-hymnal-collecting pastor, who also loves loud rock music.  And I see a bit of a correlation to the longevity of Petra, and the enduring nature of some worship songs/hymns.

This isn’t a knock against modern worship music.  There is some really good stuff out there, from the Gettys to Sovereign Grace Music, and Ross King, City Alight, etc.  Time will tell how long some of those songs will last.  And I’m not saying all the old stuff is great.  In my 200+ antique hymnal collection there are hundreds and hundreds of songs that no one has sung in hundreds of years.  But there are some that stand the Test of Time (another Petra song title, sorry).

Those old hymns with the depths of lyrical content, and even some of the quality of musicianship.  It reaches beyond generational borders, with children and grandchildren singing along joyfully with their parents and grandparents.  Some of it surely comes down to personal taste.  Not every one is a Petra fan (though I can’t understand why not).  Shoot, somewhere in the world there may even be someone who doesn’t like "Amazing Grace".

But again, there are just some songs with a depth of meaning and quality of authorship that go beyond one or two generations.  So give those old songs a chance.  You might be surprised at the results.  Just like my 16-year old son’s joy seeing Petra.  Old guys rule, and young guys love it.