As you are probably aware, the Boy Scouts of America are the latest national organization to give in to the Gay Agenda Juggernaut.  Having stood by their convictions for so long, they finally caved in, citing that they could no longer "legally" resist.

Joe Carter has written a wonderful response over at the The Gospel Coalition blog, in which he bemoans the fact that we are teaching young men that principles aren't worth standing for if it means a legal challenge.  He also rightly points out that many churches and faith-based organizations have also fallen prey to that mindset.  Principles are worth standing for, as long as you don't face opposition and legal challenges.

Somehow that doesn't seem to fit with the portrait we have of Peter and John before the Sanhedrin being commanded to stop speaking of Christ and responding: "Sorry, but we can't help it." (slight paraphrase).  Truth is worth standing for in all circumstances.

Now, I realize the Boy Scouts are not a faith-based group, certainly not a Christian one.  I grew up in Scouts and had a good experience, in fact came across many good, godly leaders.  But the organization isn't Christian.  In fact, after spending three years doing mission work on a Sioux Reservation, I came away a bit uncomfortable with the Scouts' glorification of Native American religious ideas and rituals.

Still, for the longest time, BSA has been a place of moral conviction.  Standing up for principles of right and wrong because they understand that the principles they stand for are the foundation of good citizenship for the young men in the program.  It breaks my heart to see them finally give in to the pressure of the Gay Agenda.

The new lesson we are giving young men is simply that principles are good and worth teaching, but not worth fighting for if a minority of radical activists applies legal pressure.  The lesson is that activist judges are too powerful and fearful to stand against.  The lesson is that truth is only worth standing for when the standing is relatively easy.  This lesson is more harmful than all the Native American junk theology I was worried about.

These are indeed perilous times for those who seek to stand on Biblical principles.  The secularization of culture has reached a new high in this nation, and the activism of the minority continues to frighten many into silence.  But again, the threat is no greater than what the church has faced for generations, and indeed faces even today around the world.

I pray God will raise up men and women of conviction who will continue to stand for truth, even if it means "the organization" will fall.  Better to have an organization fall than to have the principles on which we stand be demolished.  Here's hoping this latest falling domino will do more to motivate people of character than to end up crushing others in it's wake.
Posted by Scott at 10:33 AM No comments: 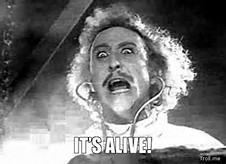 It's been nearly a month since I posted here.  Part of that has to do with the fact that we took some time off to go pick up our oldest daughter after her year in Germany. (Anyone wanting to read her exploits can do so here.)  We decided to take some time to spend together as a family since we had to make a trip anyway.

Then, when we returned, church "stuff" was in full swing.  In addition to VBS (going on right now, and you all know how much time that takes!), and other fun things, we've had several major crises for some of our families.  It's been a busy, stressful time.

So I get online to check out my little corner of the blogosphere, and to my amazement it's been nearly a month since I've posted here.  Wow.  Sorry.  Anyone still there?  I know I had been slowing down anyway, and probably losing some of my wide range of regular readers.  *Ahem*  Now, it may seem as if this is dead space completely.  Well, moreso than usual.

Anyway.  So much has happened while I was away.  The horrific murder of church goers.  Banning Confederate flags while making deals to fund terrorists in Iran.  A terrorist attack right on American soil killing 5 US Marines, while this Administration completely ignores it, along with much of the media (guess if the gunman was a cop instead of a Muslim, and the victims were criminals instead of US Soldiers, it would have garnered more attention, but...)  And now the unveiling of the horrors at Planned Parenthood that many of us have been convinced of for years.   Oh, the continued decline into the moral cesspool.

In the meantime, how about enjoying this amazing bit of recorder magic.  Just because.