I have what can only be called "eclectic" tastes in music. My favorites cover a wide range: Newsboys and Supertones, Pillar and Disciple, TobyMac and Tait, Ceili Rain and Eden's Bridge, Petra and Stryper, and a great "big band" called Denver and the Mile High Orchestra.

I've had a passing interest in rap and hiphop, but outside of DCTalk/TobyMac, never listened to it much. Until I found these guys.

A few years ago at a conference in St. Louis I met a young man named Marcus Gray, aka Flame. One listen to his lyrics and I was hooked. You can learn more sound doctrine from one of his songs than you can in many churches.

Regardless of how you feel about rap in general, any lover of sound doctrine will enjoy Flame's work.

Likewise, a friend (I assume) of Flame's is Lecrae. His latest project is likewise filled with sound meat for its content.

Just for fun I thought I'd share of couple video feeds on these guys. The one from Flame is not actually a "video" but the song with the lyrics scrolling across. This is good for those who have a hard time following it.

The second, from Lecrae, is an actual video to his song "Don't Waste Your Life", which I'm sure was inspired by the John Piper book.

Hope you enjoy. And praise God for "sound" theology!
Posted by Scott at 9:23 AM No comments:

Just returned from four days of fantastic worship and preaching in St. Louis. This is the second year Rockport Baptist Church in Arnold has hosted this event. I didn’t get to go last year, but this year’s was absolutely wonderful.

The overall theme was “The Eternal Love of God Shown in the Cross of Christ” and all the speakers did an amazing job. I took our two oldest children with me and they both said they enjoyed it as much as I did.

You can go HERE to see more info about the conference, and I would strongly recommend going to Rockport’s Sermon Audio site where all 14 messages are available for download.

I came away with a greater appreciation for the worthiness of our Great God of grace, and His desire for us to draw near to Him, as well as what it means to truly live as a living sacrifice. Check these out; it will be worth your time.
Posted by Scott at 10:38 AM 2 comments:

Got up at 3:30 this morning to go sit in the woods with my son. No, I’m not giving him some strange sort of sleep deprivation punishment. We were scouting turkey in advance of next week’s spring turkey season.

As we sat there in the quiet, watching the sun rise, listening to the woods around us slowly come to life, I couldn’t help but fall into an attitude of worship. What an amazing God we serve! What a glorious creator; and what a joy to be given the gift of enjoying that creation. 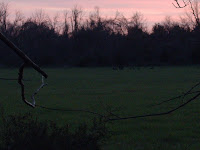 I couldn’t help but think of the words of Psalm 148:

Praise the LORD! Praise the LORD from the heavens; praise him in the heights! Praise him, all his angels; praise him, all his hosts! Praise him, sun and moon, praise him, all you shining stars! Praise him, you highest heavens, and you waters above the heavens! Let them praise the name of the LORD! For he commanded and they were created. And he established them forever and ever; he gave a decree, and it shall not pass away. Praise the LORD from the earth, you great sea creatures and all deeps, fire and hail, snow and mist, stormy wind fulfilling his word! Mountains and all hills, fruit trees and all cedars! Beasts and all livestock, creeping things and flying birds! Kings of the earth and all peoples, princes and all rulers of the earth! Young men and maidens together, old men and children! Let them praise the name of the LORD, for his name alone is exalted; his majesty is above earth and heaven. He has raised up a horn for his people, praise for all his saints, for the people of Israel who are near to him. Praise the LORD! (Psalm 148, ESV)

I also found myself singing the words to an old song by Kerry Livgren’s Christian band called AD. (singing quietly in my head, that is; we were scouting turkey after all!)

Dreaming awake as I'm lying down
Gazing at starlit skies
The feeling grows as my wonder shows
Trying to crystallize
The wind in the trees is a melody,
Just like me, yearning to harmonize

The rivers speak and the waters cry,
Wanting to hear Your name
Deep in the bowels of an ancient earth,
Groaning to be reclaimed
Anticipating the grand return,
Crying out for the page to turn

I want to know as I am known
And see You as You are
Every knee will bow,
And all will proclaim

Joy at the end of the great decline
For all who will heed Your call
An end to the sin and an end to the pain
You will restore us all
We're sons of dust in the Son of Man
Chosen long e'er the world began.

I want to know as I am known
And see You as You are
Every knee will bow,
And all will proclaim

Isn’t it amazing how the awe of God can just sneak up on you like that. All camo’ed up, sitting 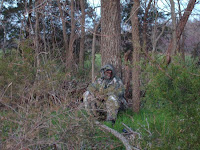 there waiting for a gobbler to give away his roosting spot, I never thought this would turn into a time of worship. But then, how can it not when all creation sings His praise, and “The heavens declare the glory of God, and the sky above proclaims his handiwork” (Psalm 19:1, ESV)

May we be ever faithful in joining the rest of God’s creation in giving Him praise and honor and glory and adoration every moment of every day!
Posted by Scott at 10:33 AM 1 comment:

Haven't had time or energy to post here is a couple weeks. Thought I'd just pass along some sage advice I found on Tom Ascol's blog. Apparently it's been around awhile, but as usual I'm slow to catch up. Enjoy.

At a press conference yesterday afternoon, Representative Pete Hoekstra (MI) and Senator Jim DeMint (SC) introduced the Parental Rights Amendment to Congress (H.J. Res. 42). I would encourage everyone to contact their US Representative and urge them to support this. This issue is critical given the current administration’s affinity for supporting the UN Convention on the Rights of the Child. Below is the speech given at the event by Michael Farris, President of ParentalRights.org

On behalf of ParentalRights.org and the rapidly growing number of allied organizations, I want to thank Senator Jim DeMint, Congressman Pete Hoekstra, and my own Congressman Frank Wolf for their leadership on this important issue.

There are two basic reasons that the Constitution has been amended throughout our history. Sometimes the need is to preserve our law and traditions from potential threats and erosion of our rights. The Bill of Rights serves as the chief example of amendments designed to preserve the existing rights of the people.

At other times, it is absolutely necessary to change the existing law. The 13th, 14th, and 15th Amendments were clearly necessary to end the evils of slavery and establish the principle of equal protection for all Americans.

The Parental Rights Amendment follows the pattern of the Bill of Rights—the goal of this Amendment is to preserve our existing law and traditions against judicial erosion and the ever-growing threat of international law.

Sections 1 and 2 of this Amendment do nothing more than restate the time-honored doctrines of the Supreme Court on parental rights. We are simply changing parental rights from an implied right based on judicial opinions to an express right based upon actual constitutional text.

Section 1 faithfully employs the words and phrasing of the Supreme Court’s decision of Pierce v. Society of Sisters, 268 U.S. 510 (1925), to declare that the liberty of parents to direct the upbringing and education of their children is a fundamental right.

Section 2 carefully follows the words of the Court in Wisconsin v. Yoder, 406 U.S. 205 (1972), to declare that parental rights, while very important, have limits. The government may intervene when the interest is of the highest order and not otherwise served. This section is a correct statement of current law. Today, when the government has proper evidence of child abuse or neglect, it may and should prosecute a parent who is responsible for such behavior.

Section 2 ensures that this principle remains intact. Parental rights are fundamental, but they are not absolute.

Section 3 preserves the current principle that only American laws govern the relationship between parents and children in this country. The use of international law is a rapidly growing trend in our judicial system. One federal district judge in New York has on two separate occasions ruled that the UN Convention on the Rights of the Child already binds the United States under the doctrine of customary international law. An Ohio court ruled on an obviously flawed premise that this treaty had already been ratified by the Senate, and therefore ordered parents to stop smoking because it harmed the health of their children.

Section 3 makes it clear that the only law which can be used in American courts regarding American families is the law made in America by our legislatures or the people themselves. The use of international law for domestic purposes is utterly contrary to the idea that this nation is a self-governing Republic.

Section 3 makes it unconstitutional for this nation to enter into a treaty that gives away our sovereignty on the subject of American parents and American children.

This should be a bi-partisan issue. President Obama recently declared, “In the end, there is no program or policy that can substitute for a mother or father.” Every member of Congress who agrees with the President on this principle should be in favor of this Amendment.

Every member of Congress who believes that Pierce v. Society of Sisters, 268 U.S. 510 (1925), was correctly decided should be in favor of Section 1.

And every member of Congress who believes that only American legislators should make public policy for American families should be in favor of Section 3.

So do the majority of Democratic voters.

Those who voted for McCain reject international law.

A majority of those who voted for Obama reject it as well.

Every region of the nation rejects international law.

This is a bipartisan issue in America among voters, and I truly hope and believe that it will become a bipartisan issue on the Hill. The gap between the values of Capitol Hill and the values of the American people has grown too large on too many issues. This is the very best place to show the American public that we all can work together for shared values.
Both political parties say they are for family values. And this will demonstrate meaningful support for the family.

This Amendment preserves two essential values: the value that good families, not government, have the right to make decisions for children; and that America, not the UN or any other nation, gets to make our public policy to govern the critical relationship between parents and children.