On Gay and Drunken Preachers

The use of satire and sarcasm in trying to convey spiritual truth has long been debated. Although we see the use of both in Scripture, those who try to use these forms today are often misunderstood and ostracized.
One of my favorite Christian artists has always been Steve Taylor. Known by many for his behind the scenes roll producing and writing songs for the Newsboys, Taylor was a pretty hot commodity himself back in the day. But he caught a lot of flak from the Christian music industry for satirical songs like "I Blew Up The Clinic Real Good." People didn't get it. He was ridiculing the kind of thinking portrayed by the character in that song.

Anyway, I've always been a fan of the satire and sarcasm. I think it often shocks us into seeing the truth of things where we might have overlooked it otherwise. This is why I like the Sacred Sandwich site so much. And I especially like their most recent article responding to the ELCA officially approving of homosexual clergy.
The ridiculous nature of that is brought to light by this sarcastic and satirical article which tells of another "denomination" which has now approved of "drunken clergy." This Sacred Sandwich article really highlights the slide toward total immorality being embraced by the church.

Go HERE to read the article.

Lessons From the Bristol Night Race 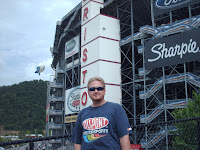 Bristol this weekend, (see my last post) I thought I might try to “redeem the time” by drawing out some lessons I learned from the whole experience; some general lessons, most lessons that would be useful for the church to really learn.

Fellowship
Every pastor should spend several days on a road trip with a deacon. Deacon Ron, his wife, son and myself logged over 1600 miles over four days. During that time, we talked, laughed, joked, filled in some “holes” in our respective life stories. We spent time talking about Christ, life, ministry. This is lacking in many churches, the sharing of life and faith at a deeper level as we live together day by day. It’s too often just about the weekly services. We need to spend more time with our brothers and sisters in Christ.

Generosity
Originally, these four tickets were to include a fourth family member. But when she couldn’t come, Ron offered to take me; at his expense. Granted the tickets were already bought. But he didn’t offer to sell the ticket to me to get back some of his investment. He wouldn’t even let me pay for part of the gas (though I did manage to sneak in a pay for a couple of smaller things along the way). He knew that I would enjoy this trip and he offered it as a gift, a ministry, to me. How great it would be if we all spent more time thinking of how we might make someone else’s day, how we might serve them, instead of always thinking of ourselves and our own wallets.

Passion and Commitment
Again, we logged over 1600 miles, just to see a race. Others came from even farther. They drove for days, camped out overnight, or parked a mile away and walked in (okay, maybe not a mile, but it seemed like it). Once there, you could see right away where their commitment was. People wearing hats and t-shirts with their favorite driver’s “colors.” They had seat cushions and coolers and radio head sets with that team’s number and paint scheme. No one had to even ask where their loyalty lay.

Where is that kind of passion and loyalty in the church? Why don’t we wear our “colors” for the whole world to see? Why do so many Christians just blend in to the world around them, and you’d never know that our loyalty was to Christ? I’m not saying that wearing a Christian t-shirt is the answer (in fact, too often that’s a result of the easy gospel we’ve come to market in this country, where wearing a t-shirt is about all we do for Christ). I’m talking about how we live, the passion with which we show our commitment to Christ, the things we’re willing to endure, the lengths to which we would go for His service, for His glory. Sadly, that passion just isn’t there too often. 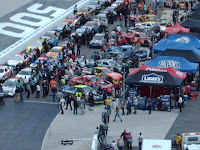 Go back to all those various team loyalties. In a crowd of 120,000 you have a whole hodgepodge of loyalties. You have rabid Jeff Gordon fans sitting in the seat next to an even more rabid Tony Stewart fan. Right below them are Dale Earnhardt Jr. fans. A few rows over is someone passionate about Mark Martin, or Matt Kenseth, or even that (shudder) Kyle Bush guy. And yet as passionate as they are about their driver, there’s no real animosity, no fights breaking out. Because we’re all here for the same reason, to enjoy a great race, one big NASCAR family.

Why can’t the church come together like that sometimes? I’m not suggesting that we ignore real differences in theology; faithfulness to sound Biblical doctrine is non-negotiable. But why is it that we so often gather in groups “just like us.” It’s like a stadium full of nothing but Jeff Gordon fans (now that would be cool!). We need to see that we may all have different backgrounds, different socio-economic standing, different life experiences, different racial identities; but we are all one in Christ. We are here for one reason: to lift up and glorify the name of Christ and make Him known to the lost world around us. Jesus even prayed for us to be one, so why can’t we put selfish things aside and be one?

At the beginning of this race, there was a brief ceremony to honor Mark Martin, who was making his 1000th career start in NASCAR. He’s one of the true “good guys” in this sport. (He proved that at the end of the race by not wrecking the 18 for the win when he could have, and when just about everyone else would have, and when the crowd would have loved it if he had!) We even got to be part of the “card stunt” where our grandstand area spelled out a big message in tribute to Mark (how cool was that?!).

The point is, the crowd went crazy. People wearing the competition’s “colors” were all on their feet yelling, screaming and applauding someone else’s driver. Because we respect him.

Too often in the church, we fail to respect and honor those who have faithfully served the kingdom. Period. We fail to mark those occasions and recognize their service in general. Furthermore, even if they are honored, we don’t join in the celebration if they’re not “one of us.” We need to get over it folks. We’re all on the same team. Faithful saints of God deserve our respect and honor whether they like our songs, read from the same translation, etc. We need to recover a healthy respect for our “elders” in the church. 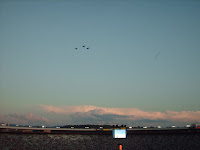 I know this is getting long, and this really has nothing to do the church per se. I’m not one of those who think Jesus is an American and that God must bless America. But in this day of anti-patriotism, where our military is ridiculed and scorned, where loyalty to your country only goes as far as party lines will allow…it was nice to be in a truly patriotic crowd.

Before the race, there was a tribute to our men and women serving in the military. Every now and then the video would break away from pictures of soldiers over seas, to live video of soldiers there at Bristol. And the crowd went crazy in its applause. Walking around the track, soldiers in uniform were constantly being stopped by other fans. They slapped them on the back, gave them a big handshake and thanked them for their service to our nation. During the national anthem every hat was removed, hands were placed over hearts, and when three fighter jets flew over at the end of the song, it put goose bumps on your arms and tears in your eyes. As Deacon Ron leaned over and said to me “If that don’t bring a tear to your eye, you’re just not a real American.” (Or as the Lt. Governor of Tennessee called us in his pre-race comments: God-fearin’, gun-lovin’, real Americans. To which the crowd said: Yeaaaaaahhhhhhhhhh!!!!!!!!!!!!!)

There we actually some other things I thought of, but this is way too long already. I’m not suggesting that the church should be like a bunch of beer drinking race fans. Even though they all shouted “Amen” after the pre-race prayer, I’m sure that more than a few, if not most, don’t truly know Christ. But I would say that there are some lessons about passion, honor, etc. that we could learn here. And really, they are lessons that we should be learning from Scripture, because they’re all right there in the Book.

Now that all that serious stuff is out of the way, let me just say this: The Bristol Night Race Absolutely Rocks!!!!
Posted by Scott at 9:37 AM 1 comment:

Obviously I’ve not posted here in awhile. Life has just gotten pretty hectic in the last week or so. However, I’m looking forward to a little break to indulge in a road trip that is a “dream come true” for me.

One of our deacons ended up with an extra ticket for the Bristol Night Race. If you are not a NASCAR fan you will not understand the import of this; and nothing I can write here will

adequately describe it for you. Suffice to say that I have always told my wife that if I could ever attend just one Cup race in my lifetime, it would be the Bristol Night Race. It’s been a few weeks since he offered, and I’m still not sure it’s a reality yet.

Now, I understand that this is pure pagan delight. I will of course miss church this weekend. A preacher skipping church for a stock car race must be the height of idolatry. However, I can’t help myself.

Actually, I’ve been working on my NASCAR habit recently. Having reduced our satellite package to the bare minimum, I haven’t actually even seen a race on TV in a couple months (no Speed Channel, No ESPN, etc.). I haven’t wasted money on racing paraphernalia in almost a year. I’ve been doing quite well. But this is the complete fall off the wagon kind of thing!

Pray for our 12+ hour road trip. Pray it doesn’t rain and postpone the race! And pray that I will be forgiven for this little indulgence into worldly pursuits. Oh, yeah, and…GO JEFF GORDON!!!