“Lesser of Two Evils” and Other Fallacies

Since I decided to try and get this thing going again, I might as well jump right in to this election thing.  Actually, at one time, many, many years ago, my opinion of presidential politics actually garnered some national attention. I was interviewed and quoted by both the St. Louis Post Dispatch and the New York Times! (as always, I'm living off the past!)

Anyway, for the last several election cycles I've been supporting the Constitution Party.  And, just like this year, I've been harassed for not supporting one of the two major party candidates.  The candidates have changed, but the arguments about why I should support them have not.  And so I'll give a relatively brief rundown of these arguments and show why they don't hold water.

The Lesser of Two Evils
The biggest argument is that while neither of the two parties have given us a decent candidate, the one is better than the other, so we have to go with the lesser of two evils.  Personally, I think this is a lazy attitude.

Who says we only have two choices.  Yes, I know the third party candidates don't have much of a chance, but it has to start somewhere.  The GOP started as a third party.  Someone took the time and effort to support them, and now they are one of the “big two.”  It can, and I think should happen again.  Nowhere in our Constitution are we limited to two parties.  These two are broken, and need to go.

Furthermore, I think of Jesus when confronted by the two “parties” of his day, forced into a choice of supporting one of them.  Should He pay taxes, and support the pro-Roman party.  Or should He resist, breaking the law, but supporting the traditionalist Pharisee party.  Instead of giving in to a clear “lesser of two evils,” Jesus showed a third option.  Give to Caesar what is his and give to God what is His.  Yes that meant paying the tax, but not in support of the Romans; still showing allegiance to God. 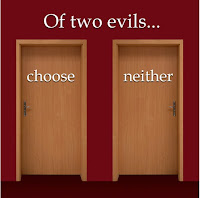 In my case, I'll give to Caesar what I owe him, which as a good citizen is my vote.  But I'll give to God what I owe Him, which is my allegiance and my conscience, which doesn't allow me to support either of the major party candidates.  And of course as Spurgeon famously said, “of two evils, choose neither.”

You're Wasting Your Vote
The other “big” argument is that if I vote third party, I'm wasting my vote.  Worse yet, my GOP friends tell me, by voting for a third party, I'm actually voting for the Democrats.  Other than the ridiculous logic of that (a vote is a vote, folks.  My vote for Castle doesn't add a vote for either Clinton or Trump, period); there is also the issue of the electoral college.

We act like we're a majority rules democracy, when in actuality we are a representative republic.  Part of that is this silly electoral college system where my state of Missouri gets only 10 votes, whereas California gets 55.  I understand the whole population thing, with more populace areas getting more electoral votes, but the system is outdated and currently stacked firmly against the middle part of the country.  But I digress.

The point is, in the last two presidential elections I voted third party.  The GOP candidate still won Missouri and its 10 votes.  But those pitiful votes, along with most of the middle of the nation, weren't enough to compensate for the massive numbers on the coasts.  So my vote did not cause Obama to win.  The electoral college system did.  And it wasn't a “wasted” vote, because more and more people are starting to stand up and take notice of the Constitution Party and others, which may still one day, make a real change.  (Hey, a guy can hope, right?)

The Supreme Court is the Biggest Issue
This is the biggie this time around.  We know, or think we know, that the next president will have the chance to appoint more than one Supreme Court justice.  And as we all know, they rule the country.

Several problems.  Number one, the fact that we give so much weight to these justices shows how bankrupt our government is.  These guys are not supposed to be making legislation, only enforcing it.  The Congress is supposed to be making the laws.  Why aren't we focused on the senatorial and representative races, then?  Because we know that our broken system has allowed a runaway judiciary to pull all the strings.  That needs to change, folks.

Number two, we are not God, and we don't know the future.  We don't know how many of these justices will be retiring/dying in the coming years.  We can make educated guesses, but we don't know.

Number three, we also don't know with any certainty that Trump will nominate better justices than Clinton.  It seems that way now, but Trump has a long history of changing on the issues, so how do we know he won't do so again, especially if it's politically expedient for him?  I can't trust him, honestly, so I'm not going to let this issue sway me.

And number four, quite simply, this is not the biggest issue.  The biggest issue has always been and always will be the Gospel.  The Gospel has survived worse governments than either of these two will give us, and it will continue to survive.  This is where my commitment lies, and I will not compromise the Gospel for political pragmatism.

God May Be Raising Trump Up
This is really, really weak.  Not that God may not be doing that.  But the truth is, He may be raising up Hillary as well.  Look at Israel's history.  God gave them a few good kings, but He also raised up plenty of vicious, evil kings because of their rebellion as well.  So don't try to be a prophet and say Trump is God's man just because you don't like Hillary. 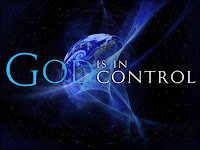 Summary
It boils down, for me, to two things.
1) God is Sovereign.  He has already determined who our next president will be.  He will give us the leader we deserve, the one he has determined for His purposes to either bless or curse this nation.  That being the case...

2) My Allegiance is to Christ.  Since He will determine the outcome, my job is to be obedient and honor Him.  I can't do that by supporting Clinton.  She is a lying, cheating, supporter of baby killing; and those are some of her better qualities.  I also cannot honor God by supporting Trump.  He is arrogant, intolerant, unrepentant; and again, those are some of the lesser “evils.”  His recent comments are akin to the same attitudes and actions of Mr. Bill Clinton when he was in office, and I remember “evangelicals” calling for his removal from office and chanting things about “character counts.”  (Consider this SBC resolution).  Why does character not count now that it's “our” guy who is being called out.  We need to be consistent. I don't think I can “honor” Christ by actively supporting either of these.