What the Church Needs Most

I’ve shared before some of the insane things churches are doing to try and draw crowds, be different, be new and exciting. This week a read about a pastor in England who says the answer is that the church needs to do more swearing. He says our language is too tame, and since the rest of the world talks in filth, that to reach them, we should, too. In fact, he went so far as to say that Jesus used foul language while on this earth. He says that we have Jesus on a pedestal, and that his language was actually down and dirty in the gutter along with the folks he was ministering to.

Sadly, there are many who have already been doing that for several years, using foul language and obscene jokes in the pulpit because they think it makes church more relevant. Never mind the fact that Ephesians 4:29 clearly says: “Let no corrupting talk come out of your mouths, but only such as is good for building up, as fits the occasion, that it may give grace to those who hear.” Who cares what the Bible actually says, let’s just do what we can to be relevant. And that’s just one example.

One popular pastor is preaching a sermon series on the Twilight 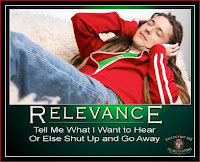 series of movies and books. Because after all, Scripture is all about vampires and werewolves, right? Another pastor brought in a professional motocross jumper for one of his sermon illustrations and paid big money to have an elaborate outdoor mountain backdrop set up on stage. All in the name of being relevant and drawing crowds.

So what does the church need? How can we reach a lost world, be relevant, etc.? The answer is simple: We need to see a radical revival. Of course, even there we have to do a little explaining, because for those who have been around the church all their lives, the word revival just means a series of special meetings where we bring in a different speaker and maybe some extra special music, and have an evangelistic emphasis. And there’s nothing wrong with that per se. But that’s not really what genuine revival is all about.

Revival is about the condition of our hearts before God. It’s about the people of God being renewed in a radical commitment to Christ and His Word. And if we want to truly see the church grow and prosper, then a radical revival is what is needed. Andrew Murray said: A true revival means nothing less than a revolution, casting out the spirit of worldliness, making God's love triumph in the heart. And Vance Havner said: Revival is the church falling in love with Jesus all over again.

What the church needs, is to fall in love with Jesus all over again. We need a revolution, a casting out of the spirit of worldliness, and the love of God triumphing in our hearts. And that’s exactly what happened to the people of Judah during the reign of King Josiah.

You all remember the basic history. During the days of the divided kingdom, both Israel and Judah fell often into wickedness and idolatry. As a result, God sends Assyria to destroy Samaria, the northern capital and carry off the nation of Israel. And eventually, Judah will fall to the same fate at the hands of the Babylonians. But in the midst of all the idolatry and wickedness, there are one or two blazing bright spots.

One of those was during the days of Josiah, recorded in 2 Kings 22-23. And what the church today needs are the same three things we read about there.

1. There was a radical return to the Word of God. After lying neglected in the temple for generations, Josiah’s officials uncover a copy of God’s Law. After reading it, Josiah tears his clothes in mourning and then calls the inhabitants of Jerusalem together for a public reading. Priests and prophets. City leaders and the common folk. Everyone comes together and he has the Word of God read to them. And not only do they read it, but king and people together make a commitment to once again make it the center of their lives.

For radical revival to come to God’s people, it must begin with a radical return to the Word of God. We may not live in a day where God’s Word lies dormant in a run down building somewhere; without anyone knowing about it. But, if we’re honest, too many places in the church see the Word of God lying dormant around our houses, neglected except to be taken to church once a week or given a token reading once in awhile. One poll showed that a whopping 43% of professed Christians said they honestly didn’t read the Bible at all during the week. How is that any different than in Josiah’s day?

And just look at the state of the church today. Major Denominations have seen huge upheavals over the issue of recognizing gay marriages, and even ordaining homosexuals to the ministry. Further out on the fringes you have everything from those churches promoting being drunk on the Spirit, walking, or I should say, stumbling around like they’re in some drug induced stupor; to churches who promote punching and kicking people in an effort to heal them and chase out evil Spirits. All because they simply refuse to govern themselves by the Word of God. If we want to see genuine revival in God’s church, then we need to see a radical return of a commitment to the Word of God among the people of God.

2. In Josiah’s day there was a radical removal of worthless idols. Looking at the idolatry run rampant in his nation, the king started pulling down, burning, destroying, defiling all those idols, high places, etc. Not just setting them aside; wiping them out. 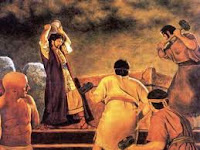 Those things need to be radically removed from our lives. Jesus said that if your eye offends you, pluck it out. And I know that’s harsh and radical. And I don’t think he meant to literally dismember yourself. But he’s trying to point out the radical nature of this. Don’t just set sin aside; kill it, burn it, destroy it, get rid of it. It has no place in your life.

3. There was a radical restoration of worship in Josiah’s day. We read of the repair to the temple in Jerusalem, as well as the restoration of the Passover feast, which hadn’t been celebrated in nearly 300 years.

Now, you and I know that genuine worship isn’t necessarily about buildings. And we know that ritualistic acts of worship can become nothing more than that, just rituals. But the point is, once we have committed ourselves fully to the Word of God, and once we have removed all the false idols in our lives, we ought to have within us a passionate desire to exalt the name of God in worship; to see His name lifted up; to worship Him in the splendor of His holiness.

I’m not talking about the emotional free for alls that some call worship. But I am saying that we need a return to the biblical, powerful, passionate, life changing kind of worship that we read about in God’s Word. Not the bored, mundane, half hearted effort that so many of us are guilty of sending in on a regular basis. You don’t have to jump and shout. But there ought to at least be some signs of genuine life when we come together for worship.

What we need is a radical revival. It needs to start with me. But I invite anyone and everyone reading this to join with me in praying that God’s people would fall in love with Jesus all over again. Pray that we would truly see a revolution, a casting out of the spirit of worldliness, and triumphing of the love of God in our hearts. And to God be the Glory!
Posted by Scott at 2:00 PM

I agree 100%! It seems this generation of "Inner-tainment-driven" Christians are growing deaf to real preaching and true repentance.

Excellent word for today! The latest series I have seen advertised is something like Summer at the Movies. The church is going to preach a morning series on the movies in the theater and how they can relate to the bible. How ridiculous!

Let's teach the word and pray that God would apply His Word as He sees fit.

...Our text today, comes from the second scene from New Moon, the Twilight saga...

Gregg: I saw the "summer at the movies" thing from several churches. The Museum of Idolatry site even has the worst promo for that I've ever seen.

Eddie: Surely there is a Calvinistic Cartoon in that thought somewhere!

Thank you Mr. Eddings, sir. You are indeed the man! Love the cartoon.

For anyone following the thread this far, here's the cartoon in question...