On this election eve, let me again beat my patriotic drum for a minute. I know that Scripture says we are to “Be subject for the Lord's sake to every human institution” (1 Peter 2:13). And a lot of folks will misinterpret this passage to say that submitting ourselves to authority, the king or governor, means that Christians should not be involved in politics. In fact, I once read that one of my favorite conservative commentators had backed down saying that Christians have lost the battle and we should no longer be involved trying to influence our government. Folks, that's in no way what Peter is saying here.

He's saying that we ought not to instigate riots or political upheaval for the purpose of political or selfish gain. In other words, we ought to be good law abiding citizens. But only so far as that law is not in contradiction with the law of God. Over in Chapter 4, Peter writes, "If you suffer, it should not be as a murderer or thief or any other kind of criminal, or even as a meddler. However, if you suffer as a Christian, do not be ashamed but praise God that you bear his name."

Peter knew what he was talking about. You'll remember that it was Peter and John who stood trial before the religious authorities for preaching the truth of Christ even after being told not to. Peter stood firm and said, "Judge for yourselves whether it's right to obey you or God, but we can't help but speak about what we've seen and heard." And again later Peter says, "We must obey God rather than men."

So Peter isn't saying we should stand by and watch godlessness take over. What he's saying is summed up just a few verses after he makes the “be subject” comment, in 1 Peter 2:17: "Fear God and Honor the King." Jesus taught the same principle when he told the disciples "give to Caesar the things that are Caesar's and to God the things that are God's." Let's examine Peter's two short statements "Fear God and Honor the King" in reverse order.

A. First HONOR THE KING. What does it mean for you and I as Americans, with regard to our Christian citizenship, to honor the king? We don't have a king in America, do we? How does this fit into a modern world of elected presidents and governors. Well, what I'm going to say may surprise you a bit.

Our nation was found on the principle, the revolutionary idea of "we the people." That concept is expressed in a representative form of government in which citizens, we the people, elect leaders to govern as our representatives. The ideal is that they act as we requested them to, representing us. Now, obviously we've gotten away from that ideal a bit, but the way this country was conceived was as a nation of the people by the people and for the people. In a sense then, the people, you and I, are the king in our representative republic system.

The way that Christians honor the king in America, other than obviously being law abiding citizens, is to be involved in the political process. Take part. Get educated and exercise your rights and responsibilities as a citizen of this nation.

Now before you leave thinking I've lost my marbles, think of Paul. When arrested he claimed his right as a Roman citizen to have a hearing before Caesar himself. Paul knew his rights and responsibilities as a citizen of Rome and he exercised them. He worked within the system.

Here in America, working within the system means first and foremost that we get out and vote. Your right as a citizen and your responsibility as a Christian citizen is to vote, make your voice heard, to work within the system and be the best American citizen you can be. That's how we honor the king.

B. Peter's other statement is that we FEAR GOD. As followers of Jesus Christ, we exercise our citizenship in light of our fear of God. What does that mean exactly? Peter provides instructions on how we are to fear God back in verse 16. He says "live as free men, but do not use your freedom as a cover up for evil; live as servants of God," or as one translation says "as bond slaves of God."

As Christians we should consider taking part in our governmental process to be a serious spiritual matter. It should be bathed in prayer. We should take time for careful reflection on how our vote can be used to secure a more righteous society, because in America, we get the government we ask for, and deserve what we get.

Fear God. Honor the King. What are some practical, concrete ways of doing that? Pastors are often accused of spouting off good sounding religious ideas, but never giving practical help. Well here it is. Practically speaking, here are three things to do to be a good citizen who fears God and Honors the King:

1) PRAY - Pray that our government will affirm biblical morality in our laws. Pray that God will show us which issues are worth fighting for. Pray that He will give us the courage to be obedient to His laws first and foremost. 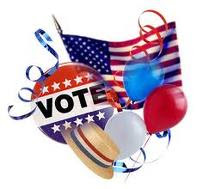 3) VOTE - Christians of all people should strive to be good citizens, registering and voting; and yet, the percentage of Christians who vote is as low or lower than that of unbelievers. VOTE! It’s not only an American right, it’s a Christian responsibility. The church needs to wake up, get our heads out of the sand, and start being responsible Christian citizens who fear God and honor the king. Hopefully you’ve already been praying and educating, so tomorrow, get out there and vote.

(Voiceover: I’m Scott Weldon, and I approve this message.)
Posted by Scott at 10:35 AM